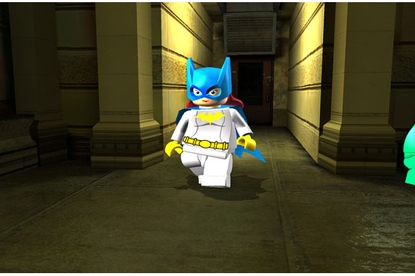 The developers behind the magical LEGO Star Wars and the thrilling LEGO Indiana Jones bring their brand of blocky fun to the world of Batman. Full of surprises, humor and an all-star cast of playable characters, it's yet another solid reinvention of an established license. Plus, it has Batman in it!

I am a huge nerd when it comes to Batman, so my expectations for the LEGO version of my favourite superhero franchise were understandably high. After seeing what Traveller's Tales did with the Dark Knight, I'm really happy to say that it lives up my expectations as well as the high bar set by the company's previous efforts. With just the right amount of humour and some clever game design, LEGO Batman's a great title for Bat-obsessed fanboys and casual gamers alike.

The first thing I noticed about LEGO Batman is that it isn't as silly or as lighthearted as its siblings. Gotham City is a far darker place and Traveller's Tales wisely kept that motif intact. There are some welcome attempts at humour, like the characters emotive faces and pratfalls, but it's not overdone, which is a good thing overall. The colour palette skews more towards darker tones but the visual style still jumps out at you.

Gameplay wise, it stays true to the LEGO formula — you run around cleverly designed levels breaking apart the scenery, collecting gobs of LEGO studs and solving simple puzzles. You also fight criminals and deal with the occasional boss fight but it isn't particularly taxing, especially since you get unlimited lives (the only penalty is that you lose some studs each time you die, which affects your end of level rating). There are also some cool vehicle-based levels that add a nice sense of variety and multiple costumes you can collect that impart special abilities. You also get to play from the villains' viewpoint which is especially awesome since the baddies, from the Joker on down, display the most personality.

The only gripe I had with LEGO Batman is that you really can't play it alone; the AI partner isn't particularly helpful and while it does an adequate job of being in the right place when it comes to cooperative puzzles, it spends most of its time just sort of standing around. But the real joy of a LEGO game is heading out with a friend to smash stuff up and grab scads of loot, so it's not that big of a deal.

With a great variety of levels, tons of things to smash and collect, and a loveable cast of iconic heroes and villains, LEGO Batman is a fun and enjoyable title that will appeal not only to younger gamers but to Batman fans alike. It's not Dark Knight: The Video Game but it's an excellent addition to the Batman mythos nonetheless.