One thing the LEGO series still knocks out of the park is its whimsical take on established franchises, and the magic-filled world of the Harry Potter is a perfect aesthetic match for the coloured bricks 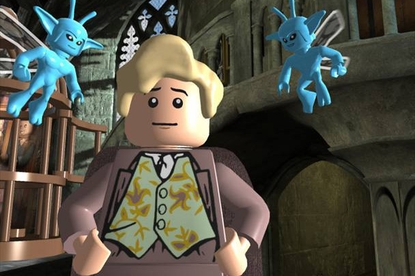 While it expertly captures the heart and essence of both the Rowling books and the popular films, LEGO Harry Potter: Years 1-4 is bogged down by trite gameplay mechanics and a lack of innovation in TT's long-running series of LEGO adaptations.

LEGO Harry Potter: Years 1-4 may be the first game to blend the escapades of the ever-popular youth wizard with the age-old plastic blocks, but it's the seventh such title to follow the exacting mould set by LEGO Star Wars, later replicated by Batman and Indiana Jones-themed iterations.

It's a series built on two key tenets: personality and repetition. In earlier LEGO instalments, the humorous cutscenes and lighthearted interpretations of familiar scenarios generally outweighed the tiring routine of smashing up environments and collecting LEGO pieces. But after half a dozen iterations, that balance is shifting, and LEGO Harry Potter serves up too much of that not-so-fresh feeling, despite strong production values and a clear appreciation for the source material.

One thing the LEGO series still knocks out of the park is its whimsical take on established franchises, and the magic-filled world of the Harry Potter is a perfect aesthetic match for the coloured bricks. Exploring Hogwarts will be a thrill for Potter die-hards, and Harry, Ron, and Hermione are all here, along with a cast of 160+ unlockable characters you can use to tackle completed stages. Like the earlier film and comic-based LEGO titles, LEGO Harry Potter often feels like a giant, interactive love letter to the films in question.

Sadly, it's a love letter comprised largely of trite, cliched lines. Instead of bashing through enemies and the environments, LEGO Harry Potter instead gives you a number of spells to use to trigger actions and squeeze collectible bolts out of items. It's a minor change in execution, though, as the levels fall into the same routines over and over again, whether you're looking for ingredients to mix potions or wandering aimlessly around a room, trying every spell in your arsenal to figure out a way through. It can still entertain with a co-op partner in tow, but unless you place yourself in the upper echelon of Potter nerdery, I wouldn't recommend playing much of the campaign on your own.

Despite the aforementioned aesthetic match, the Harry Potter universe feels a bit crowbarred into the mould of the previous LEGO games, as certain elements just don't make the transition. Flying broomsticks are seriously marginalised in the game, and during Quidditch matches, you don't play the fantastical sport; instead, you wander around the stadium, fighting enemies and collecting bolts while the match rages on in the background. Also omitted is the solid level creator introduced in last year's LEGO Indiana Jones 2, and online co-op is similarly missing from the game disc. Warner Bros. says the latter will come in a post-launch patch (like LEGO Indy 2), but if they want it in the game and know how to do it, why wait?

LEGO Harry Potter: Years 1-4 is a fair bit more interesting than EA's most recent film adaptation, but I would've rather seen the developers tackle the project with the same level of creativity as a precocious kid with a pile of LEGOs, rather than squeeze the Potter universe into an existing and well-worn template.