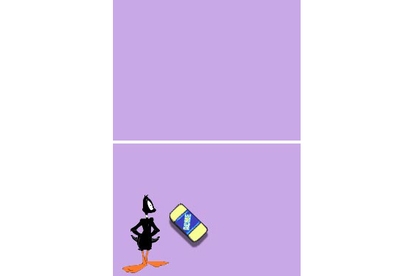 In the end, the premise and execution are interesting but the actual gameplay just wasn't enough to help the game live up to the Looney Tunes name.

In the classic Looney Tunes cartoon Duck Amuck, a sadistic artist — later revealed to be Bugs Bunny — wielded the almighty paintbrush to draw in scenery, erase things and play mind games with the volatile Daffy Duck. In the DS game of the same name, you take over for Bugs and brandish the almighty stylus in order to drive Daffy stark raving quackers.

The premise of Duck Amuck is simple: make Daffy's life miserable in every possible way. Daffy makes it easy, too, as he stands against a blank touch screen, doling out verbal abuse and daring you to do something. You have free reign to drag your stylus across the screen to tear the background, sit and wait, poke at him, pick him up and throw him around. Eventually, you'll irritate Daffy enough to get a reaction, which opens up access to mini-games. For example, if you tap on Daffy's head enough times, it will send him off in a huff to bring you three cans of paint which you can use to paint the background or even Daffy himself.

The most amusing part of the mini-games are that the objectives are counterintuitive — you're supposed to do it "wrong". When firing Daffy from a cannon, it's not the wooden target that you're supposed to aim at; it's the barrel of TNT. You're not supposed to help Daffy escape Marvin the Martian, you're supposed to trip him up with bombs so Marvin catches him. I found myself confused often and hitting pause to discover the objective of each mini-game more than once but it is a nice change of pace from the usual video game norm of penalising mistakes instead of encouraging them.

The games make imaginative use of the DS' functionality: most just take advantage of the touch-screen but others rely on audio cues and make good use of the microphone as well.

The problem with the mini-games, though, is that they're pretty simple and there aren't enough of them. Yes, there are more than 20 but they're not particularly deep or complex, so the game definitely could have used more. And while searching out the minigames feels fresh at first, the process for discovering new ones is a little convoluted and you'll no doubt end up triggering and retriggering the same games you've already played.

Ironically, one of the more intriguing mini-games is triggered by shutting the DS case on Daffy. When it closes, Daffy shouts at you and initiates a mini-game in which he tells you to hit either the L and R shoulder buttons; it sounds sort of boring but the audio cues make it novel enough. Unfortunately, I could not get the game to trigger a second time, no matter how many times I opened and closed the DS.

Furthermore, a slew of glitches run constantly throughout the game. Certain character coins glitch when you tap them, causing the entire game to skip and freeze. The game is also victim to the "dead zones" of the DS touch screen. Items got stuck in the gap between the top and bottom screens, and once, during the "Bleeding Black" mini-game, the stick I was supposed to tap on was actually dropped completely off the screen, requiring me to reset.

Looney Tunes: Duck Amuck had great potential, but it has some bugs that definitely need to be addressed. I was playing an advanced review ROM so it is possible that they will be addressed at the last minute but if they sneak into the final product, look out. Also, while it was nice that the developers held true to the original visual style, I couldn't help but feel that the game looks a little dated.