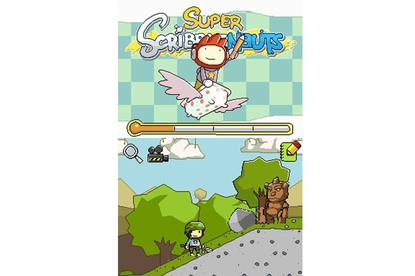 The original Scribblenauts was an eye-opening example of what can happen when a developer thinks outside the traditional game design box. Its clever use of words and items hinted at its vast potential, but some mechanical shortcomings got in the way of the fun. Super Scribblenauts not only addresses those issues, but adds a nice layer of complexity with the addition of adjectives, making for a game that finally showcases the imagination inherent in 5th Cell's bold design.

While most folks would likely agree that Scribblenauts' innovative approach of using words to spawn puzzling-solving items was nothing short of fantastic, the execution of last year's Nintendo DS hit sharply divided players. Some critics, like GamePro's own Tae K. Kim, embraced the overall vision of the game and saw past its technical flaws, while others (myself included) were too frazzled by poor controls and other qualms to give it enough time to properly sink in.

Thankfully, Super Scribblenauts lives up to its name with an enhanced second effort that finally delivers the series' charming potential. One might argue that adjectives are the biggest addition here — the "Super" in Super Scribblenauts, if you will — but for me and assuredly many others, the most notable change is the ability to control Maxwell in a meaningful way. In the first game, your only option was to tap the screen to move the hero, who would then shamble several steps in that direction, regardless of what hazards lay in his path. Not only was it frustrating to be bound to haphazard stylus controls, but many puzzles also required precise movements, and it was far too easy to unintentionally lead Maxwell into a pit or off a ledge.

Thankfully, Super Scribblenauts rectifies this mistake with the ability to control Maxwell with the d-pad or stylus (you can swap between the two at will from the pause menu), plus his movements are now minute, letting you control him as you would a character in a traditional side-scrolling platformer. It's a night-and-day kind of difference, and one that lets you fully focus on conjuring up splendiferous pairings of nouns and adjectives.

Just as adjectives greatly expand our language possibilities, they serve a similar purpose in the game, letting you describe people, animals, objects, and more in varying manners to solve puzzling situations. But luckily, you aren't bound by the rules of reality here: I used the term [COURAGEOUS RED MACHETE] in one stage (when tasked with imbuing a man with courage), and the resulting crimson blade hopped around with immense vigour. Up to 10 adjectives can be added per item, so run wild with your descriptions — you'll need them for the new adjective stages, which present objectives like creating items bearing the characteristics of multiple others, or solving equations by filling in blanks.

And if the scope of the Scribblenauts experience only seems to frustrate you, take heart: a new hint system — which allows up to two hints at a time in exchange for earned Ollars (in-game currency) — eases the process, and is perfect for those mind-bending stages where an otherwise reliable [JET PACK] and [CTHULU] seem worthless. Plus, the level editor sports a shiny makeover here, with greater customization options for building epic puzzles and sharing them online or with nearby pals.

Super Scribblenauts' puzzles are arguably richer and more interesting than those of the original, due to the use of adjectives and an expanded dictionary, and clever homages (the nods to Super Mario Bros. and The Wizard of Oz particularly stand out). But the sequel is otherwise slimmed down, with just 120 new stages — a noticeable drop from the bountiful 220 levels in the original. Puzzle stages account for the vast majority of those, though a series of challenging special stages unlock as you progress through the core levels.

But expert scribblers will no doubt find Super Scribblenauts' enhanced approach a major net positive over simply receiving a larger batch of levels, while the rest of us finally have a user-friendly way to experience this immensely creative idea. It's satisfying to see 5th Cell finally realise the series' potential beyond the conceptual level, and with the nuts and bolts finally secured, I'm hoping a future third entry can really expand on these fertile roots.