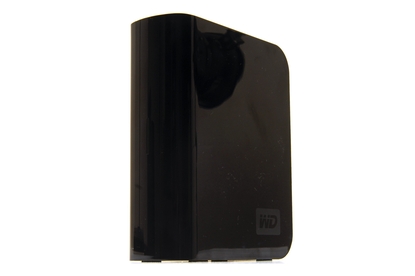 This is a basic drive with plenty of storage space at a competitive price. It's suitable for anyone who wants to expand their computer's capacity, without going under the hood.

There isn't much to this My Book Essential Edition drive. In fact, it's aptly named as you won't get any unnecessary features or connections. It's small, button-less and, apart from a distinct blue LED, inconspicuous.

Furthermore, it's ready to use as soon as you pull it out of the box. Simply plug it into a free USB 2.0 port on your PC and you'll straight away be able to store stuff on its capacious 750GB hard drive. That drive has a formatted capacity of 698GB, and when you consider the drive's low asking price of $249, it works out to be 35 cents per formatted gigabyte. That's tremendous value for an external drive and you needn't spend more money unless you need other connectivity options such as Ethernet, eSATA or FireWire.

On the inside, the My Book Essential Edition has a 7200rpm hard drive with a 16MB buffer, which was plenty fast in our tests. It averaged 21.73MBps in our write test and 25MBps in our read test (our source drive was 500GB Samsung SpinPoint), while in the read/write test it managed to transfer data at a rate of 17.24MBps. It's an ideal drive for storing downloads, music and pretty much anything else.

The My Book's exterior is made out of plastic and the internal drive is kept cool purely by the air vents that surround it. There aren't any fans present, which means the drive is very quiet except for the odd noise that can be heard during read/write operations. However, you don't want to pick up this drive and move it while its reading or writing data as it will make a slight grinding noise, which was unnerving during our tests to say the least. Just sit the drive on a desk and let it do its thing before moving it.

Included in the package is the drive's power adapter and a USB cable. You get some software with the drive, which is actually stored on the drive and not supplied on a CD, but it's not the full version software. You get Memeo AutoSynch and AutoBackup, and the latter, in particular, is worth checking out as it's a very easy to use backup program. You can tell Memeo AutoBackup which folders you want to backup, so each time you plug in the My Book drive, those folders will be automatically backed up. You can also tell the software how many additional versions of files within your backup folders you want to keep and you can elect to encrypt files, this means you'll only be able to restore them if you use the Memeo software.

For anyone who wants a basic external hard drive for their PC or notebook, but one with plenty of storage space, this one is ideal. It's a no fuss solution and it won't cost you too much either.