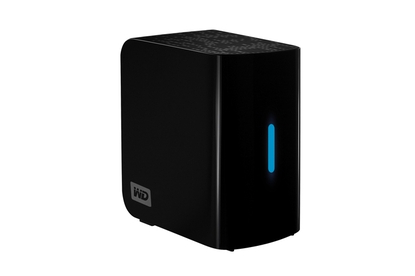 Sometimes you just can't protect valuable files enough. Whether you use the primary drive of the Western Digital My Book Mirror Edition (and rely on RAID 1 to make a second copy on the hidden secondary drive) or use the included backup software to make an additional copy of files on your system's built-in hard drive (using RAID 0) or two copies (with RAID 1 enabled), the quiet, fast and easy-to-set-up Western Digital My Book Mirror Edition gives you the best and simplest data protection in a user-friendly drive we've seen.

There's no such thing as too much protection for your valuable files. Although external hard drives can provide backup copies of files on your hard drive, what if you use external drives for primary storage? Sure, you can use yet another external backup drive, but a better solution might be a RAID array with two drives. Western Digital offers such a system with its new My Book Mirror Edition.

Packed inside a 166x154x98mm black enclosure are two hard drives that connect to your system via a single USB 2.0 port. The Western Digital My Book Mirror Edition is preconfigured as a single Windows NTFS partition using RAID 1 (mirrored) mode for a total capacity of 1TB. Files saved to this primary partition are automatically copied to the secondary drive, which is hidden from view. In fact, files on the second drive can't be directly viewed by, say, a file manager, and can't be accessed from applications).

If you're not interested in RAID mirroring and prefer a single 2TB drive to the Western Digital My Book Mirror Edition, you can use the included WD RAID Manager software (there are separate versions for Windows and Mac systems) to switch to RAID 0 (striped) mode. You gain the full storage capacity of both drives combined into what appears to your system to be a single drive, but there's no mirroring of your data.

Installation of the Western Digital My Book Mirror Edition is a simple matter of plugging in the power and USB cables. When you insert the accompanying utility disk into a CD drive to begin installation of the RAID management software, the installer automatically (and silently) installs the WD Drive Manager software. After that, if you mouse over the WD Drive Manager icon placed in your System Tray, you can see basic facts about the drive: Percentage used, RAID configuration (0 or 1) and status of the drive (healthy, RAID 1 degraded and so on).

Right-click on the Western Digital My Book Mirror Edition's Drive Manager icon and you can launch the WD RAID Manager to see specific property information, including the serial numbers of each drive, each drive's status (for example, whether the installed drive isn't RAID compatible or is missing) and each drive's RAID status (for example, whether it's degraded or there's a RAID rebuild in progress). WD RAID Manager is also the tool you'll use to switch between RAID modes 0 and 1 (doing so erases all data on both drives, however).

The utility disk also offers automatic backup software that continuously monitors your system. When you save a file (for example, to your system's C: drive), it automatically backs up the file to the Western Digital My Book Mirror Edition's "primary" drive. If you have RAID 1 enabled, then the system makes a third copy of the file on the second drive on the My Book that's only accessible if the primary drive fails. If a file becomes corrupted or deleted on your PC's C: drive, the recovery process is not automatic; you have to restore the file back to the C: drive yourself by using the backup software's "Restore Files" option.

A vertical-lighted blue strip (divided into four segments or bars) on the front of the Western Digital My Book Mirror Edition's drive enclosure serves several purposes. When constantly lit, the drive is powered on. If it flashes every four seconds, that indicates the drive is in standby mode. If the top and bottom bars flash, then one of the drives is having problems and you need to take action (such as replacing the drive). The four segments also light up when the drive initially powers up; one is lit for every one-fourth of total of capacity used.

In addition to the software CD (which includes the user guide in PDF), the Western Digital My Book Mirror Edition comes with a USB cable and AC adaptor. The drive automatically powers up and down in sync with your system.

Using Version 2.55 of the HD Tune benchmark test, we saw an average transfer rate of 27.0MBps., 16.3 ms average access time and a burst rate of 23.0MBps using 15.5 percent of the CPU, which is average for a drive of this size. Copying a 1GB Mpeg file on our hard drive to the Western Digital My Book Mirror Edition (when configured as RAID 1) took 53 seconds.

According to Western Digital, the My Book Mirror Edition uses a convection cooling architecture that keeps the drives cool without fans and uses one third less power than competing drives. We can attest to its cool and quiet operation.

You can open the top of the enclosure and replace either drive (though you're limited to using WD Caviar GP hard drive assemblies, according to the user manual). The Western Digital My Book Mirror Edition starts the rebuild process automatically; rebuilds usually take between five and seven hours, according to the manufacturer, but can take up to 12 hours.