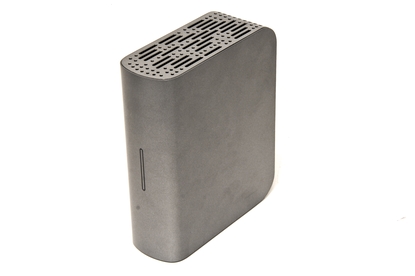 Western Digital's MyBook Office Edition range is an inexpensive business-focused external storage option. Although it lacks a range of interface options such as FireWire or eSATA, the bundled software provides additional connectivity options.

The range offers four different storage capacities at 320GB, 500GB, 750GB and 1TB. Apart from the 1TB, all these drives run at 7,200rpm with a cache size of 16MB. The 1TB also has a 16MB cache, however Western Digital has not disclosed the rpm speed. It's reasonable to assume however that it is around the 7,200rpm mark. The USB 2.0 interface is more than enough to take advantage of the hard drive's speed. Nevertheless, given the range's orientation towards remote access, it may have benefited from the inclusion of a gigabit Ethernet port.

The drive case is simple and well-designed, and has a sleek look. Ventilation is achieved simply through perforations, though this is sufficient enough for the drive to remain operational for extended periods of time. During heavy use, the case only warmed very slightly, but otherwise it remained at room temperature. The case's front LED indicates drive activity and acts as a capacity gauge, though in our testing this was far from accurate. The case is essentially minimal but is nonetheless elegant.

Drive speeds are acceptable. Transferring 5GB of data over USB 2.0 from the 1TB drive to a 5,400rpm notebook drive, the MyBook averaged read speeds of 21.6MBps and write speeds of 25.5MBps. The read/write copy transfer tests yielded results of 12.3MBps, slightly slower in comparison to Western Digital's My Book Essential Edition hard drive, but still fast enough for the majority of storage purposes.

This range utilises a bundle of applications in order to distinguish itself from the other Western Digital drives. These include WD Anywhere Backup, MioNet, Memeo AutoSync and Google Apps. As these applications are all free or trials, they do not really add to the value of the hard drive but nevertheless they do offer some expanded functionality. WD Anywhere Backup is a full version of its in-house one-touch backup solution, MioNet is only a basic version and Memeo AutoSync is restricted by a 30-day trial.

MioNet is the most useful application of this bundle. The software offers Web-based and integrated remote access for local data, allowing the MyBook and its host computer's data to be accessible via the Internet. Setup of the software is simple, as it only requires installation on the host computer. The data can then be accessed through MioNet's Web site via secure login, or integrated into Windows by installing the program onto the remote computer. During testing, this function was easy to use and provided no hassles. Speed was somewhat restricted by the Internet connections used, though this is understandable. As with any remote access situations, insufficient Internet upload and download speeds will restrict transfer speeds.

However, the biggest problem associated with the software is media sharing. In response to the possibility of content piracy, MioNet has restricted access to any music and video files which do not have DRM. The host user can access these files on any remote computer provided the same account is used, however this media will be hidden from any other user accounts attempting to access the same data. While this is somewhat understandable from a copyright perspective, it severely restricts the software's capabilities and limits its potential use.

The Western Digital MyBook Office Edition is a capable hard drive which, despite a lack of interface versatility, offers the distinctive feature of remote access. At a cost of 42cents per GB, the 1TB option is definitely an inexpensive method of storing large amounts of data both locally and remotely.