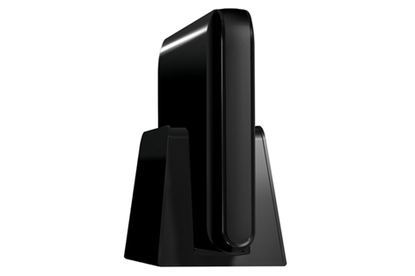 The Western Digital My Passport AV is a capable external hard drive that can store and stream video files without a hitch. Unfortunately, it's not the zippiest hard drive on the market, which somewhat lessens its appeal.

The Western Digital My Passport AV is a portable USB 2.0 external hard drive with a 320GB capacity. As the 'AV' in its name implies, it has been specifically designed with the video connoisseur and camcorder user in mind. It provides reliable video playback, as well as a few AV tricks that most other hard drives lack.

According to Western Digital, the My Passport AV has been especially optimised for smooth video playback. You can stream movies through your television’s USB port (if it has one) or via a compatible media player. Supported models include the Sony BDP-S370 and LG BD390 Blu-ray players, the PlayStation 3 and Xbox 360 video game consoles and the Western Digital WD TV. You can also transfer camcorder movies directly to the hard drive without using a PC — however, you will need a Sony camcorder to take advantage of this feature.

We connected the Western Digital My Passport AV to our Western Digital WD TV and played back some video files we took at this year's Electronic Entertainment Expo. While it's difficult to vouch for the WD AV's superiority over other hard drives, we were nevertheless impressed with its playback performance. Our videos appeared smooth and glitch-free from start to finish (well, apart from the glitches that were already there).

Western Digital has a reputation for making compact, durable hard drives and the My Passport AV is no exception. Weighing in at 180g and with dimensions of 16x126x80mm, the Western Digital My Passport AV can be carried around in a laptop bag with ease. It will also make for an unobtrusive fixture in your home entertainment system (a vertical stand is included in the sales package).

During operation, the Western Digital My Passport AV was whisper quiet; an important consideration if you plan to marry it to a media player for frequent video playback. It also remained cool to the touch throughout testing.

To test the Western Digital My Passport AV’s transfer speeds, we copied files back and forth between the drive and our 300GB Western Digital Velociraptor system testbed. We also copied the folders from one location on the drive to another to test its speed when simultaneously reading and writing files. Each test folder contained a variety of files adding up to 3GB and 19.2GB, respectively.

Let’s take a look at how it compared to other external hard drives on the market:

When it came to file transfers, the Western Digital My Passport AV gave a middling performance. Its write speeds were slightly slower than the competition, mustering an average score of just 18 megabytes per second. Read/write speeds were also a little sluggish. When you consider the size of most HD video files, this is an area where the Western Digital My Passport AV should have excelled. (We also transferred a batch of camcorder AVCHD files, but received similar results to our benchmark tests.)

Sluggish transfer speeds aside, the Western Digital My Passport AV is an attractive external hard drive that will provide reliable video storage and playback.