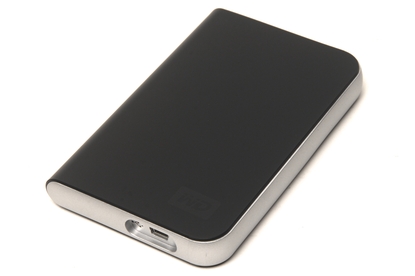 Western Digital's My Passport for Mac is one of the cheapest 500GB external hard drives currently available, and it offers decent performance for the price.

The My Passport for Mac is a no-frills external hard drive that lacks the comprehensive connectivity of the more expensive Western Digital My Passport Studio II. It is one of the cheapest external drives on the Australian market and a must-have for anyone who needs a quick and easy backup solution.

Apart from the Mac symbol and the extra labelling, the only difference between a Mac-specific drive and any other is the file system. Anyone with reasonable level of technical proficiency is able to format a hard drive into a HFS+ Journaled file system — the primary format used on Mac OS X. Thankfully, and unlike some other hard drive vendors, Western Digital doesn't charge a premium for having done this for you.

Western Digital employs familiar design aesthetics in the My Passport for Mac. The drive is enclosed in a small book-like casing with a two-tone black and silver fascia. Tapered edges and the USB 2.0 port's placement on the bottom of the unit prevent users from standing the drive up. However the My Passport for Mac has small rubber feet and a minimal footprint when placed horizontally.

Only USB 2.0 connectivity is offered on the My Passport for Mac, but this suffices for most tasks.

My Passport for Mac uses the same 500GB Western Digital Scorpio Blue (WD5000BEVT) found in the My Passport Studio II, so it performs on par with the Studio II over USB 2.0. We benchmarked the drive in HFS+ Journaled format using a 2007 15in MacBook Pro with a 200GB 7200rpm hard drive, and in NTFS format with a 7200rpm Seagate Barracuda ES2 on a test PC. In both instances it delivered decent results. Read speeds averaged 32.76 megabytes per second (MBps) during file transfers, while write speeds were only slightly slower at 24.33MBps. In a copy transfer data test — duplicating the same files on the hard drive itself — the My Passport for Mac managed to perform at 14.17MBps. The drive certainly matches the speed of Western Digital's My Passport Studio II over USB 2.0.

The drive is compatible with Mac OS X's integrated backup solution, Time Machine (but then again, all external hard drives are), and the operating system helps users set up basic or advanced syncing options and schedules. Western Digital provides documentation but not any first- or third-party software, such as the encryption software that PC users get with Western Digital's My Passport Elite. (On the other hand, no bloatware is included.)