Western Digital has updated its ShareSpace NAS device, which is designed for small businesses 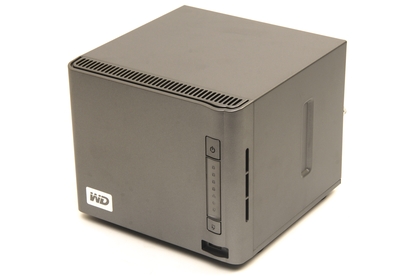 The Western Digital ShareSpace (8TB) NAS device provides lots of storage in a small space, but it is expensive. If you're after a NAS device that's easy to use and has low maintenance requirements, it is a reasonable choice.

The protruding drive bays, beige colour scheme and mass of connections typical NAS devices like the Proware DN-500A-CM have are missing on the WD ShareSpace 8TB, which has a sleek design and small footprint. It looks pretty, but its connectivity is limited and the drives can only be reached by first removing the NAS device's shell. If you don't need to hot-swap hard drives, this shouldn't be a worry.

The USB 2.0 port on the front of the WD ShareSpace 8TB NAS device allows you to automatically transfer data from external drives by pressing a one-touch backup button. You will find two more USB 2.0 ports around the back for connecting external hard drives and USB UPS devices. It has a single Gigabit Ethernet port.

Western Digital uses the same set up and configuration process employed by its entry-level MyBook World Edition NAS, so it is dead easy to get it going. The WD Discovery tool allows you to browse and map the ShareSpace's network shares as well as providing a link to the Web-based interface.

The interface is available in both Basic and Advanced flavours, and both use icons rather than a mess of text. Both versions of the interface provide access to settings like network shares and user permissions, but the Advanced interface also provides access to RAID management, user and group quotas, and media server settings. There is only one password for both modes. You can update the ShareSpace's firmware directly from the Web instead of manually downloading ISO firmware images.

Western Digital has added DLNA compatibility to the latest ShareSpace firmware, allowing users to stream media from the NAS device to compatible computers, media streamers and televisions. There is also an iTunes server, as well as an HTTP/FTP download function (but no BitTorrent) which can be protected with a separate password.

The 8TB of storage space comprises four Western Digital Caviar Green 2TB 3.5in hard drives which use WD's GreenPower technology to reduce power consumption by working at variable spin speeds. You can choose from RAID0, 1 and 5 configurations.

We tested the ShareSpace 8TB NAS device in its default RAID5 drive configuration while connected via Gigabit Ethernet to our testbed PC running Windows Vista 64-bit, with an Intel Core i7 965 CPU and a Western Digital VelociRaptor hard drive.

The ShareSpace performed adequately in Intel's NAS Performance Toolkit; it managed to stream 720p footage at a noteworthy 26 megabytes per second (MBps) in the high-definition playback tests.

In our real-world large file transfer test, the ShareSpace NAS device wrote 20GB worth of 3-4GB files at a 10.6MBps and read the files 21.4MBps. It performed a simultaneous write/read at 7MBps. In our small file transfer test, it wrote 3GB worth of 1MB files at 5.8MBps, read at 8.9MBps, and performed the read/write test at 3.6MBps. (The results from the small file test are typically slower due to an increase in the number of disk operations required.)

Our main concern with the WD ShareSpace 8TB NAS device is its price tag. The software improvements are now available to owners of the earlier, $899 2TB ShareSpace, and the increased storage capacity of the new version doesn't justify the price hike. If you need 8TB of space and are willing to get your hands dirty, you are better off purchasing an empty 4-bay NAS device like the QNAP TS-439 Pro Turbo NAS and four 2TB hard drives separately.