The WD TV Live supports the streaming of many different video and audio formats, is easy to use and it performs well 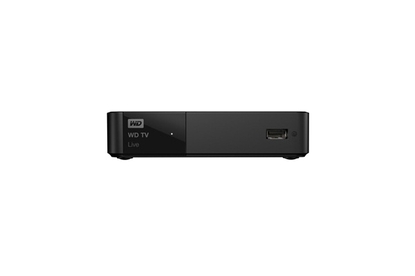 WD's tiny TV Live media streamer supports a wide range of popular formats and it can play them from directly-connected USB drives or from computers on a local network. It's a device that's easy to use and its remote is comfortable to work with. The main downside is that I had to wait for a firmware update for the streamer to work properly during my evaluation period.

This small media streamer is a little champ when it comes to playing music and video files, whether they be on locally-attached storage devices or on a home network. However, it took a while to become a champ. I've been testing this unit since the end of last year and experienced some problems with it; it wasn't until a recent firmware update that I was able to use it properly within my network environment.

Update: As of 22 May 2012, the WD TV Live also supports Spotify in Australia.

The WD TV Live is a small unit that can decode pretty much any type of video and audio file you throw at it. It can read files off USB drives attached to its front or rear USB 2.0 ports, and it can stream video from network locations once you plug it in to an Ethernet port on a router or set it up directly on a wireless network (it has built-in Wi-Fi). It can connect to a TV through HDMI at up to 1920x1080p, and it even has a composite connection for old, analogue TVs. I tested the unit by connecting it to a 40in Samsung, Full HD TV and I attached it to a Belkin router via Ethernet to connect it to the Internet and my local network.

I had no problems with the unit's picture and audio quality during my tests, but I was beset with problems from the outset when trying to play video files over my wireless network. I could play those same files off an attached USB drive without any problems, but when I tried to stream them off a laptop over my 802.11n wireless network, the video would start to get choppy, lose audio, or give me a message that the file was not supported. Bandwidth wasn't the issue as other streamers I used worked fine in the same environment. Restarts and restorations to the default configuration of the WD TV Live did not remedy the situation, nor did using different networking equipment and laptops. A firmware update that I applied on 2 March 2012 (and released 29 February 2012) is what did the trick. Once this update was applied, files streamed from computers on the wireless network without any problems at all.

One of the best aspects of the WD TV Live is its interface, which is very cleanly laid out and simple to use after a few goes. It's attractive and there isn't a wealth of options right in your face ready to confuse you. Files can be displayed in detailed lists, or as thumbnails and you can merge content to appear in each section (video or audio, for example) from USB drives and network locations. This can make the listings get out of hand if you have a lot of files, but the processor in the device is good enough to drive the menu system with a minimum of lag. (Lists obtained from wireless computers might take longer though.)

The remote control of the unit is stocky and short but it feels good in the hand. Playback controls are at the top, navigation arrows are in the middle and a number pad is at the bottom. The arrow keys and the on-screen keyboard will need to be used to enter credentials for any network computers with shared files on them, and there is an option to remember those credentials so they don't have to entered every single time.

In addition to being a player of local media files, the WD TV Live can also stream music from Shoutcast (which I made use of all the time), it can view Flickr photo streams and it can access YouTube videos and Facebook pages. It's actually not too bad when it comes to offering online content, but it would be great to see plug-ins developed for services such as iView and other Aussie TV channel Web sites.

When it comes to local files, I had no problem playing AVI, MP4 or MKV container files, I could play VOB files and MP3s, and JPGs were not a hassle. Playback was smooth and the player's reaction time to my demands was swift. I could easily stop a file, play another file, then go back to the previous file and resume from where I left off. Rewinding and fast forwarding actions were quick and useful and I didn't have to look at the remote once I learned its layout by feel. A home button is present on the remote, which brings up the main menu at any time. You can also use your phone to control the player, via an Android or iTunes app.

The only part of the interface that's a little cumbersome is the selection of the media location, which has to be done by pressing one of the colour keys on the remote. I'd like it if there was a direct 'input' or 'source' button on the remote instead instead. The player found all of my directly connected devices and networked devices, and allowed me to connect to all of them easily. In cases where my networked computer was not shown in the list, a simple restart of the WD TV Live fixed the problem. The WD TV Live also shows up on the local network and any attached USB drives can be accessed through it. This makes it very easy to transfer files from any computers on a network to an attached USB drive, so that they can be watched even when the computers are switched off.

All up, I found this to be a wonderful little player that did everything I wanted once I updated its firmware. Its media support is comprehensive, its performance is quite good, its menu system is easy to use and lovely to look at, and the Internet streaming services that are on offer are also fairly useful.