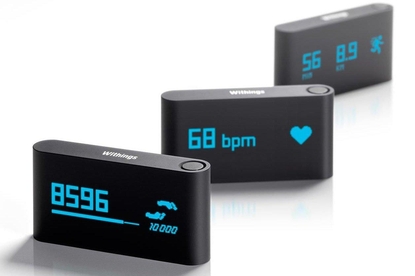 The Withings Pulse is a small activity tracker with an OLED screen, and offers the ability to measure your heart rate.

Activity tracking gadgets are becoming increasingly common, with the likes of Fitbit, Jawbone and Nike among the most popular brands on the market. Withings, best known for its Wi-Fi scales, is jumping into this market with the Pulse, a small activity tracker with an OLED screen and the ability to measure your heart rate.

The Withings Pulse is a similar type of device to the FitBit One and Fitbit Zip products, that being a small, rectangular gadget with an optional belt clip. The company says it can be worn in a number of ways, including being placed in your pocket, clipped to your clothing, or placed in an included armband accessory and worn on your wrist.

Keep in mind that while the small size and weight is a plus, it's likely to make the Pulse very easy to misplace or lose. The device isn't waterproof or water resistant, either, which is a downside given it's been designed to wear all the time. A number of competing devices boast this feature, so if you're an outdoors person, or you want to wear a product of this kind in the shower, you'll need to weigh up your options.

The Pulse offers mostly the same features as its competitors including tracking steps, distance, elevation climbed, and monitoring sleep. The sleep function needs to be activated manually and, like Fitbit, Withings has included a sleep wristband to store the Pulse on your wrist when you're in bed.

Perhaps the best feature of the Withings Pulse is the fact that it allows users to measure their heart rate by simply pressing their finger onto the back of the device. According to Withings, the device will then display the users' pulse on its OLED screen. We're not sure entirely how accurate this heart rate feature will be, but it's certainly an inclusion that could convince many users to opt for the Pulse over rival devices.

The Pulse's display is a touchscreen and allows users to view the last 14 days of recording data by swiping. This is an upgrade over the Fitbit One, which only shows data on its screen from the current day. It's also better than the Fitbit Flex, which only shows LED lights and no data, and the Jawbone Up, which doesn't have a screen at all.

The Withings Pulse syncs with the company's Health Mate app, which is available for both Android and iOS devices. The tracker itself has Bluetooth 4.0 connectivity and can be set to auto sync in the background.

Withings says the Pulse's battery will last up to 14 days before requiring a recharge. In addition, there's a feature called 24-hour Power Save mode when the battery is running low. It will turn off the screen but still track all your data for up to 24 hours.

The Withings Pulse is available now in the US, but there's been no word yet of an Australian release. It sells for US$99.

A promotional video of the Withings Pulse can be seen below.