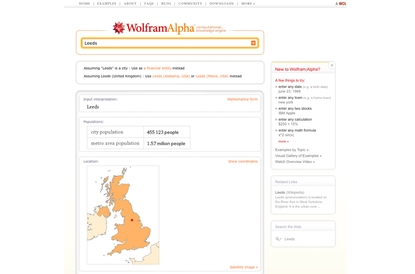 Wolfram Alpha is fun to play with, and introduces an original format for finding information on the web. As it currently stands, it may be useful for mathematical and scientific research. However, until it aggregates a lot more data, and learns to handle more complex user queries, this interesting experiment is no danger to Google.

What is it? Wolfram Alpha is a "computational knowledge engine", and is the brainchild of Stephen Wolfram, the founder of Wolfram Research, whose most well-known product to date is Mathematica, a computational application that is used by mathematicians, scientists and other technicians.

Wolfram Alpha's mission is to go beyond simply finding and listing links to websites, and instead to pull the needed data from those sites and provide users with the answers to their questions. In other words, it will travel through websites so you don't have to.

What does it do? Wolfram Alpha gathers data based on your search terms and presents you with the answers in a well-formatted structure, using charts, graphs and other visual aids. For example, if you want to compare statistics about several different cities, you type in their names and find out that, say, Tokyo has several thousand more people than New York.

What's cool about it? If you're of a scientific bent, Wolfram Alpha could be a great resource, once Wolfram Research beefs up its informational sources. It lays out the data in easy-to-read, well-formatted pages that include a variety of charts and graphs.

For example, when we typed in "Hubble," it came up with some interesting facts about the Hubble Space Telescope, including its current position and original launch date. Typing in "ISDN" brought up various comparative speeds and the time needed to transfer 100 kilobytes of data. And typing in "Cheerios" got me more information than I needed to know about the cereal's nutritional components.

What needs to be fixed? A lot.

While it's fun to play with Wolfram Alpha, unless you're a mathematician or a scientist you're not going to get a great deal out of it in its current iteration. Because much of the information that appears in its pages is apparently derived from "Wolfram|Alpha curated data," there is a lot — a whole lot — it can't find or understand.

We tested Wolfram Alpha about five days before it was set to launch, and it didn't take much to find its limits. Too many times, the simplest query (such as "kidney cancer") brought up the message "Wolfram|Alpha isn't sure what to do with your input." "PC Advisor" got the same response.

One thing that the company suggests you try as a test of the engine is to type in your home town. I live in Brooklyn, New York — a place that is, I believe, not unknown to either mapmakers or movie directors — and so I typed "Brooklyn" into the search engine. The best guess that Wolfram Alpha was able to come up with was Brooklyn, Connecticut. It also suggested (as a possible alternative) Brooklyn, Ohio. There is a "more" drop down menu (in case the first alternative isn't enough) which listed Brooklyns in Michigan, Wisconsin, Indiana and Iowa. When I finally typed in "Brooklyn, NY," I got a page comparing the populations and elevations of Brooklyn, Conn. and NY State.

Ornithologists may also find Wolfram Alpha rather frustrating: a search on "blue heron" got me the scientific names and the taxonomy of the bird, but nothing about its flight path, physical characteristics, call, reproductive habits or any other pertinent information. A search on "mockingbird" was a bit more successful; it included other names by which the bird was known, but not much more information.

Wolfram does include a source listing for Wolfram Alpha entries, but there's no indication which specific facts come from where. A rather spare entry about Napoleon Bonaparte included (when we clicked on "Source information") a general list of references that included both the Encyclopedia Britannica and Wikipedia. But the primary source was "Wolfram/Alpha curated data."