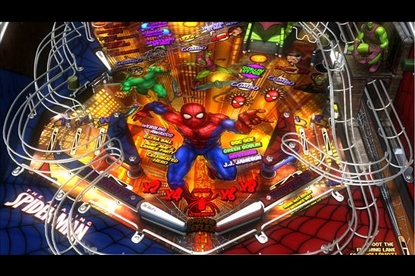 This Marvel-themed add-on for Zen Studios' Pinball FX 2 features some of the comic book titan's biggest and best known franchises. It's an innovative and fun, if sometimes uneven, expansion for an already solid pinball title.

With the golden ages of both traditional comic books and pinball machines behind us, the superhero-filled Marvel Pinball expansion for Pinball FX 2 is a welcomed alliance. This 800 MS Point add-on is ideal for any former page-flipping comic book reader or metallic ball-flipping pinball player, packed with four licensed tables: Spider-Man, Iron Man, Blade, and Wolverine. Sure, some tables are designed better than others, and the DLC makes it impossible to buy them separately, but the collection as a whole is an extension of the already-enjoyable Pinball FX 2, and it feels better fleshed out than a quick Marvel properties cash-grab.

Most of what I like about Marvel Pinball is that the gameplay remains unchanged from what Pinball FX 2's Core Collection tables had to offer. Once you launch the silver ball into the playing field, it's a matter of keeping it away from the bottom of the cabinet using the flippers and slinging it through the various railing networks. Aiming for point-reeling bumpers and surprise-holding gimmicks is the key to racking up a new high score. The key difference here from the standard FX formula is that all of those gimmicks involve instantly recognisable comic book villains that you "fight."

The boss fights aren't going to hold you over until Marvel vs. Capcom 3 arrives, but they do make the already-frantic playing field that much more chaotic. The Green Goblin is the first villain that came to life when I was playing the Spider-Man table. Initially, Norman Osborn's alter ego was idly perched on the right side of the screen, heckling me every now and again. Activating the right switch, however, sent him flying all over the cabinet, reducing my visibility of the ball. As if this distraction wasn't enough, he tossed a pumpkin bomb into the metallic ball mix. It was my job to send the orange explosive up the ramps and "defeat" this loudly cackling nuisance with a taste of his own medicine. Similar pressure-filled gimmicks occur on the Spider-Man table when other villains spring to life, each with their own unique game-changers. Dr. Octopus introduces multiple balls, while Mysterio reverses the orientation of the shoulder-button controlled right and left flippers.

Equally iconic Marvel heroes Iron Man and Wolverine have their own trio of villains incorporated into their respective tables, with the X-Men's most popular mutant squaring off against Sabretooth, the Silver Samurai, and a menacing Sentinel robot. Manipulating the Wolverine and Sabretooth figures to go at it is fun in this blue-and-yellow-saturated table, but the smaller size of the cabinet makes it feel as though there are fewer surprises than what Spider-Man has to offer.

Tony Stark, meanwhile, changes into his powered armor suit in the middle of the Iron Man table to take on the Mandarin, Whiplash, and Ultimo in the add-on's least compelling table. The billionaire playboy begins and ends every ball with pompous, repetitive one-liners, and the ball tends to gets stuck in the table's bottom third far too often. Seeing it slowly roll back down ramps is heartbreaking, then having to flip it back at short range over and over is infuriating. Far from invincible, the Iron Man table just doesn't flow as well as the other three.

Believe it or not, I found Blade's board to be the most impressive part of the add-on — which is pretty surprising, considering I haven't thought about the vampire hunter since 2004's lacklustre Blade: Trinity. The odd-man-out choice of Blade amongst the three other Marvel heavyweights proves to be a successful one with its great use of day and night themes. Hitting a switch for the nocturnal mode turns off the main cabinet lights, allowing neon colours to illuminate the board, along with the Dracula and demonic enemies that occupy it.

While luring you into the virtual pinball alley with these impressive tables, the developer keeps you in the game with real-time score tallies to show you how you're matching up against your Xbox Live friends. Local split-screen multiplayer with a buddy or competing online through matchmaking is fun, but it's easier and far more inspiring to go after the top score of the pinball wizard on your friends list. I just wish that there were more audible cues as to how I was doing, as I found it tough to pay attention to the live tally and the always-zooming pinball at the same time.

Spending ten dollars (or 40 quarters) on Marvel Pinball is an easy decision for comic book fans and pinball junkies alike. Pinball FX 2 captures the excitement of the coin-operated pastime by nailing down the physics, and this DLC adds to that with one of the most identifiable, arcade-appropriate licenses around. Moreover, Zen Studios opted to use that license to design four distinctly themed tables, each with interesting and unique boss fights, where they could've just as easily slapped some Marvel decals on pre-existing table templates. It's that thoughtful integration of the Marvel brand that really makes this add-on shine.