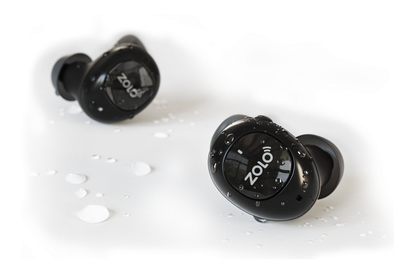 Do the Zolo Liberty+ deliver the absolute best listening experience I’ve ever gotten out of a pair of headphones? Not quite. However, for a true wireless effort, they get remarkably close.

The first thing that caught my eye about the Zolo Liberty+ earbuds - way back in 2017, when Anker were raising money for the headphones on Kickstarter - was the price. At that time, true wireless earbuds were very much an emerging and experimental category. That meant that even the most affordable came saddled with a pretty sizable premium. Back then, it was difficult to imagine anything in the category coming in at less than the $200-300 average set by the Gear IconX, Jabra’s Elite Sport and Apple’s AirPods.

So when Anker started talking up their Zolo Liberty+ earbuds at a price-point of $99, it caught my attention. Everything else - the 48-hour battery life, Bluetooth 5 connectivity and 6mm graphene drivers - was just icing on the cake.

The Zolo Liberty+ are a set of true wireless earbuds that pull audio from a connected smart device via Bluetooth 5. The earbuds boast 6mm graphene dynamic drivers, charge via MicroUSB and, on their own, tout a battery life of three and a half hours. The earbuds also boast with an IPX5 rating for resistance against water damage, courtesy of a hydrophobic nano coating.

As per usual, the carry-case for the earbuds also doubles as a charger. However, the total battery life here sits far above the average at a staggering 48-hours - double what’s offered by the Apple AirPods. The Liberty + earbuds also arrive with a suite of customization options, including three sizes of wing-tips and three sets of ear-tips.

In terms of aesthetics, Zolo have opted to keep things pretty simple and clean here. The earbuds themselves are sleek matte black buds that gradually becomes more rubberised the closer they gets to your ear. There’s a single, softly-squared, button on each the end of each earbud. In terms of the controls these buttons offer, its envisioned as more complementary than all-encompassing.

Read more Which 2018 True Wireless Earbuds Should You Buy?

Tap to pause, tap to play, double tap to call up your voice assistant, tap and hold to toggle ambient sound. Anything more complex (or even just changing the volume) will require some fiddling with the audio source - be it your tablet or smartphone. Still, despite these very clear definite limits I rarely found myself too stifled.

Zolo’s approach here is very broad strokes but when it manages to get those strokes so right - I found it hard to complain too strongly. However, as always, your mileage may vary.

The Liberty+ earbuds work fine on their own merits. However, Zolo do have an app - called Zolo Play - which allows for a few extra customization options. You can change which voice assistant the earbuds call up, manually toggle ambient sound and switch between a number of EQ presets (classical, balanced, pop, jazz). Unfortunately, there’s no more-involved equaliser here a la that found in the Jaybird RUN.

The simple, clean look of the earbuds themselves also extends itself nicely to the charger case. More metal than plastic, it’s noticeably heavier than its competition. However, considering the substantial increase the case offers to battery life, the extra weight doesn’t exactly come without compensation. A price has been exacted upon the form-factor here, but - all things considered - it was a price probably worth paying.

In terms of how they feel to wear, there’s not a whole lot to be said about the Zolo Liberty+. These are in-ear headphones. If you’ve worn headphones before. You know what to expect. Overall, the Zolo Liberty+ are generally pretty comfortable to wear - but not significantly more-so than the rest of the top-tier true wireless options out there.

It's very much the same story with connectivity. Dropouts and audio hitching isn't nonexistent with the Liberty+ earbuds. However, it's infrequent enough - and actively smoothed over by the earbuds themselves, which softly fade the audio out until the connection can be repaired - that it didn't ruin the experience. Overall, Zolo's track record here is hardly spotless but it sits well within the expected experience offered by the best true wireless experiences.

When it comes to the audio performance, it’s a whole other affair.

When I sat down to listen to the Liberty+ for the first time, I was expecting good, perfectly-listenable, results. For me, the draw for these earbuds really lay in the freedom offered by the 48 hours of battery life and the low price-point more than it did the graphene drivers.

“How much of a difference could graphene drivers make?”

Turns out, a big difference. The Liberty+ don’t offer the noise-cancelling found in Sony’s WF-1000X. However, the sound-stage they create is a strong contender for the categories best nevertheless. There’s a real sense of depth to the soundscapes here that took me by surprise.

At times, it feels like you can lean back and submerge yourself in the audio experience. Vocals-heavy songs like British India’s “Precious” and Flobots “Dance in the Light of a Burning City” come through with punchy clarity. Meanwhile, the dreamy soundscapes of Tash Sultana’s “Mystik” and “Notion” positively growl with symphonic verve and aural zest.

Do the Zolo Liberty+ deliver the absolute best listening experience I’ve ever gotten out of a pair of headphones? Not quite. However, for a true wireless effort, they get remarkably close.

[Update 23rd August 2018] Unfortunately, after about six months of solid everyday use, the left earbud began to get progressively quieter. Eventually it stopped working outright. A quick online investigation found that I wasn't the only one with this problem.  There are even a few DIY-fixes out there online for those brave-enough to try them. From the looks of it, there's a second layer behind the gold-mesh on the ear-tips which, after extended use, can become sticky enough to block out sound.

I quickly got in touch with Zolo's support team, who confirmed that my Liberty+ earbuds were indeed defective and gave me a full refund. It's a shame that I had to reach out to them at all, but credit to them for the quick turnaround. For what's it's worth, my personal experience here - both before and after my issues - was good enough that I'd be willing buy a second pair and hope that lightning doesn't strike twice. You may or may not feel the same.

I suspect it’s these qualities that will see me using the Zolo Liberty+ earbuds as my go-to true wireless companion for the foreseeable. No matter what I listened to, the Liberty+ delivered a crisp true-wireless listening experience that was easy to recommend and easier still to lose myself in.

Like I said before, the first thing that caught my attention was the price of the Zolo Liberty+. However, the superb sound and beefy battery life are the things that are most likely to keep me coming back for more. If this is what true wireless earbuds look like at the start of 2018, I can’t wait to see what they look like by the year’s end.

Disclosure - I backed the Zolo Liberty+ true wireless earbuds on Kickstarter back in 2017.