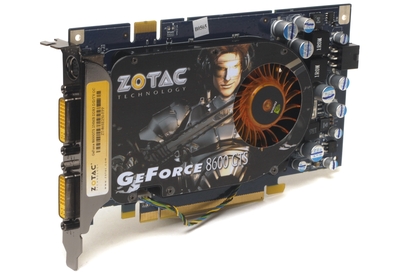 All up, this card may be a little expensive considering it doesn't come with any games, but it's a good performer and the supplied DVI-HDMI adapter and the Component cable are useful additions.

Zotac may not be the first brand that comes to mind when the topic of graphics cards is brought up, but the company's modest offerings are good performers and definitely worth checking out when you're shopping for a new card. The Zotac 8600GTS is built upon NVIDIA's new mid-range GeForce 8600 GTS GPU (graphics processing unit), but it's not an ordinary GPU.

While the packaging doesn't give too much away regarding the card's specifications, this Zotac runs its 8600 GTS GPU and 256MB of GDDR3 memory at faster-than-standard rates. The GPU is clocked at 720MHz, which is 45MHz faster than the 675MHz standard for the 8600 GTS GPU, and its memory runs at 2.2GHz, which is 200MHz greater than the standard memory speed of 2GHz. These speeds were a pleasant surprise in our evaluation and they helped produce very competitive scores in the F.E.A.R benchmark.

Compared to the fastest mid-range card we've seen so far, the ASUS EN8600GTS TOP, this card isn't far behind. At a resolution of 1280x960, and with 16x anisotropic filtering and 4x anti-aliasing, the Zotac averaged 44fps (frames per second), which is only three frames slower than what the ASUS card achieved. At the lower resolution of 1024x768, the card averaged 67fps, and again this is only three frames slower than the ASUS. These scores indicate that the Zotac will be able to handle current DirectX 9-based games smoothly with anti-aliasing enabled.

To test its DirectX 10 performance, we used the Lost Planet game demonstration, which has a built in benchmarking capability. This game is still under development and it has been converted to PC format from Xbox 360.

Using medium image quality, medium HDR, 16x anisotropic filtering and 4x antialiasing settings, the card scored 26fps at a resolution of 1024x768 in Lost Planet, which isn't anything to write home about, and is 2fps slower than what the ASUS card got. Indeed, for those of us with mid-range budgets, this result is slow and indicates that mid-range cards may not be good enough to run DirectX 10 games smoothly, while making them look good at the same time. Its still early days for DirectX 10 games though, so performance may get better through driver optimisation.

Another feature worth mentioning in the GeForce 8600 GTS GPU is NVIDIA's PureVideo HD. With it, Blu-ray and HD-DVD movies can be hardware-accelerated using the graphics card, therefore leaving the CPU free to do other things. Zotac's card claims to be HDCP ready and a DVI-HDMI adapter is supplied in the box. This is very helpful for those of you with HDMI-equipped TVs as it means you can make a clear and neat digital connection from your PC to watch high definition content. For an analogue high definition signal, the card is bundled with a Component breakout cable and a 2m Component cable (it's one of the few cards we've seen to actually come with a Component cable in addition to the breakout cable).

Physically, the card is cooled by a single-thickness heat sink and fan, which means it won't take up too much space in a PC case. It does require a supplemental power connection however, so your power supply will need to have either one free PCI Express power cable, or two free hard drive-type Molex connectors (so the supplied adapter can be used).

All up, this card may be a little expensive considering it doesn't come with any games, but it's a good performer and the supplied DVI-HDMI adapter and the Component cable are useful additions.