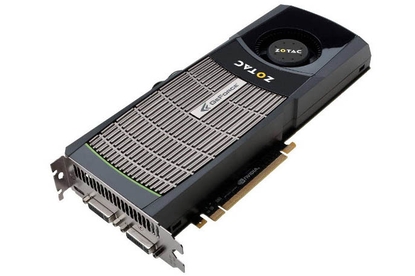 The NVIDIA GTX 480 is clearly the best single-chip solution around (although still not fast enough to beat the dual-chip 5970). But is that enough? The problem is that it's very, very expensive. Given the huge heat and power consumption of the GTX 480, the ATI Radeon HD 5970 remains the better choice of the two.

While NVIDIA's new lower-end cards started coming out many months ago, products based around its next-generation GF100 architecture have been far longer in the making. Indeed, even now NVIDIA has held back the fully fledged GF100 – the Zotac GeForce GTX 480 is actually a slightly watered down version of the GF100. But it’s the fastest single-chip NVIDIA card we’ve seen yet – and, for that matter, the fastest single-chip card full stop.

Like ATI, NVIDIA has moved to a 40nm manufacturing process for these chips, but the chips themselves are considerably larger than their ATI counterparts. However, the actual cards aren’t gigantic, and the Zotac GeForce GTX 480 should fit into any decent-sized case – it certainly won’t cause the same problems as the ridiculously long 5970, for instance.

The Zotac GeForce GTX 480 runs very hot though and the power ratings are heady indeed. The GTX 480 theoretically puts out 250 Watts at maximum load – we’ve found the real figure can exceed 350 Watts – the 5870 generates just 188. Even when idle, 47 Watts (almost twice that of the 5870) is a pretty substantial figure. One six-pin and one eight-pin connector will be needed. A few PCs can only support a pair of six-pin connectors, so you’ll need to watch for this. The 480 is a loud card in use, so you’ll really want to be using the computer in which it’s installed room to keep it in.

Both the Zotac GeForce GTX 480 and NVIDIA Zotac Geforce GTX 470 have some rather new approaches to graphics, with better handling of raster operations, enhanced floating point calculations and improved texture units. Not all of this is obvious from the specifications though. A simple measure of Fill Rate, for instance, suggests that the 480 is vastly inferior to the 5870 – 42.0GTps (GTexels per second) rather than the 5870’s 68.0GTps. And even with attention to floating point calculations, on paper the 5870’s figure of 2.72TFlops is twice the GTX 480’s 1.35.

The Zotac GeForce GTX 480 has fewer texture units too, although it does fight back on ROPs. Perhaps more significantly, its memory bandwidth (177.4GBps to 153.6GBps) is much stronger, partly down to the 480’s 384bit memory interface being considerably wider than the 5870’s 256bit alternative. It also helps that this card has a mighty 1536B of GDDR5 memory.

However, in graphics card testing the only figures that really matter are game frame rates. And here the Zotac GeForce GTX 480 feeds the 5870 its ears, pulling off a string of victories that puts the 5870 in its place. Although the Heaven and Crysis tests show leads of just 5-9fps, the 480 wins comfortably everywhere else, beating the 5870 by between 6 and 16fps in Aliens vs Predator, and 25 to 27fps in the high framerate environment of Hawx. The card has more than enough to make short work of DirectX 11, although we didn’t find the 480 to be better at holding its pace in DX11 than the 5870.