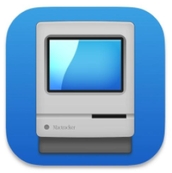 Mactracker review: One stop for all your Apple tech spec needs

An oldie and a still goodie, Ian Page’s free MacTracker app delivers the details for every Apple thing you own.