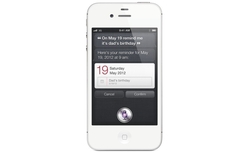 In Pictures: How Aussie is Siri, the iPhone 4S' voice assistant?

The iPhone 4S hit Australian stores today and one of the most hotly anticipated features is Siri voice control: described by Apple as a voice assistant that lets you talk to perform tasks by talking to your iPhone. How well does it handle our Aussie accent?