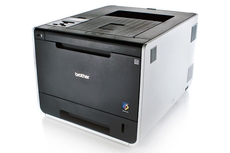 Competitive in speed and features, but not photo quality, the small-business laser printer is best for mainstream use.