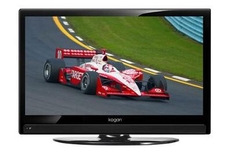 Laser's portable television is a good idea in theory, but you'll have to be in an area with good reception to get the most out of it This 19in TV would make a good choice for a bedroom