The Garmin-Asus A50 combines Garmin's GPS expertise with an Asus-built Android mobile phone. 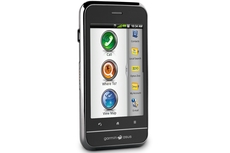