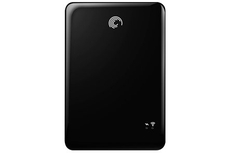 Seagate GoFlex Satellite review: This portable hard drive is designed to interact with mobile devices, but using the associated iOS app is unsatisfying