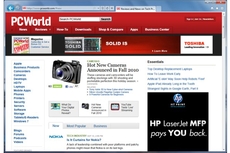 Microsoft Internet Explorer 9 Beta is a little rough in spots, but its improved performance makes it a solid upgrade.

Windows recently released the latest preview of Internet Explorer 9, titled the Internet Explorer Platform Preview. It showcases some of the enhancements that IE9 will feature, including what HTML 5 capable of.