A tooled up JVC ghetto-blaster for the digital age The GC-FM1 HD shoots great bright-light video, but is hampered by its build, finicky controls and execution of marquee features 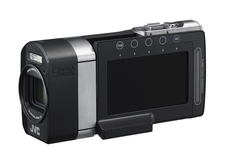