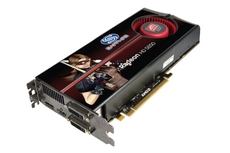 Following in the only slightly larger footprints of the sizzling 5870 graphics card comes this downscaled version, the Sapphire Radeon HD 5850 1GB Following in the only slightly larger footprints of the sizzling 5870 graphics card comes this downscaled version, the Sapphire Radeon HD 5850 1GB.

In Pictures: Here’s how Apple is spending $1 billion on sapphire

From rare gemstone to mass market material for future iPhones, iPads and more?