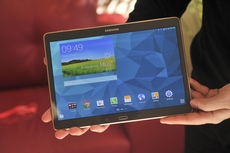 Has Samsung ruined its best tablet with its TouchWiz software?